Bargain Book #1: The Kinshield Legacy by K.C. May 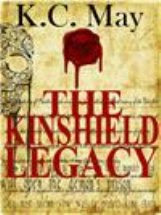 The Kinshield Legacy by K.C. May

Amazon.com (for Kindle)
Smashwords.com (all eBook formats)
Barnes and Noble (Nook and other eReaders)

Warrant knight Gavin Kinshield is a man of many secrets. He's the one deciphering the runes in the tablet. Unless he can find a suitable replacement, he'll be Thendylath's next king. All he really wants is the letter written by his ancestor Ronor Kinshield, champion to King Arek, confessing the truth of how the king perished.

Daia Saberheart, warrior of the Viragon Sisterhood, wants to find the future king and help him claim his rightful place.

Blacksmith Risan Stronghammer wants to reward him with a powerful weapon.

And the sorcerer Brodas Ravenkind wants to capture him, steal his secret and claim the throne for himself.

But when Gavin finally tracks down Ronor's letter, he gets more than he's bargained for, for the truth of King Arek's demise is far darker than he ever imagined.

What they're saying about The Kinshield Legacy:

"Wow. I was hooked in the first chapter and had trouble putting the book down to sleep last night. ... I was completely and utterly engaged." --GraceKrispy's blog, Motherlode