Bargain eBooks #7: The Rule of Otharia Series by Debra Martin and David Small 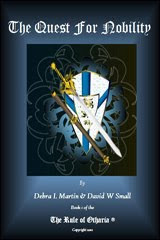 The Rule of Otharia Book 1: The Quest For Nobility by Debra Martin and David Small

Amazon.com (for Kindle)
Smashwords (all other e-readers)

The idyllic life of royal teenagers, Darius and Dyla Telkur, from the planet Otharia takes a horrifying turn when their parents are murdered. With their cousin appointed as Regent until Darius comes of age, it doesn’t take the twins long to figure out that he’s bent on stealing their throne one way or another. To escape their cousin’s wrath and a false murder charge, they flee to the only safe place they know where no one will find them – the forbidden and quarantined planet Earth.

Safe on Earth for the moment, the only way for them to return home is to find an ancient 10K traveling crystal left behind by their Otharian ancestors who visited Earth 1500 years ago. Enlisting the help of a London university archeologist, they begin their search for the crystal from clues buried deep within the Arthurian lore of Merlin and Lady of the Lake. What they find instead is evidence of a secret trade pact between Otharia and Earth that was established centuries ago. Before Darius and Dyla can understand what it means, they’re in jeopardy again; this time pursued by those on Earth who want the secret to remain hidden. Who is behind the trade pact and what is being traded are the questions the twins need to figure out while trying to stay one step ahead of the Earth assassins.

What they're saying about The Quest For Nobility:

"...there are links between the planet Otharia and Arthurian legend that make me say, "Yes, please, more."--Amazon Reviewer

"...I would highly recommend this book"--Amazon Reviewer

The Rule of Otharia Book #2: The Crystal Facade by Debra Martin and David Small

Amazon.com (for Kindle)
Smashwords.com (all other e-readers)


Otharian twins Darius and Dyla Telkur have a problem: they know too much. When Dyla's dream visions of London's crime boss portend an imminent threat to her family, she returns to Earth to seek answers. The twins don't realize that they have stumbled upon an interplanetary smuggling operation for crystals, the stones that fuel the Otharian's PSI power. There are those who will stop at nothing including murder to keep the secret. Assassins on both planets are on the move and the twins are the target.

The characters are well developed and you quickly get pulled into another world. The writing is good with just a couple of typos, and the story gets started with action, which I like.
Posted by Holly Hook at 8:00 PM