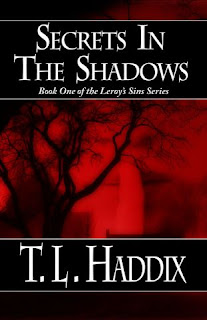 Secrets In The Shadows, Book One by T. L. Haddix

Where to Get Online:

Everyone has secrets. Don’t you? Most of our secrets are harmless. Sometimes, however, those hidden truths come back to haunt us. Sometimes they even kill, as Lauren Grant was finding out the hard way. Thirteen years ago, she was the innocent victim of a crime that still shaped her life to this day. Just as she is starting to move on and build a new life for herself and her daughter, the past comes calling with a violence she could not have imagined. Her shop is vandalized, another female business owner is brutally murdered, and Lauren can’t shake the feeling that the past is catching up to her. Will she have the strength to finally face her demons and fight for the future, or will the past overwhelm her once and for all?

What they're saying about Secrets In the Shadows:

"This was a great book filled with twists, turns, mystery and drama. It left me wanting more...and quickly!!"

"T.L. Haddix's Secrets In The Shadows does not disappoint."

"...a great all encompassing read"--KindleObsessed 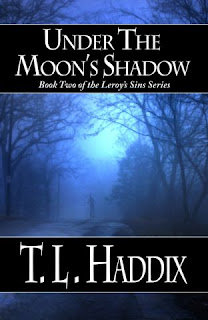 Under The Moon’s Shadow, Book Two by T.L. Haddix

Where to Get Online:

Something ominous is hovering over the town of Leroy , Indiana. People are vanishing - drug addicts, illegals, people whose disappearances are less likely to be investigated. Amid swirling rumors of altars, devil worshipping and sacrifice, reporter Beth Hudson’s investigation into the whereabouts of the missing has led her deeper and deeper into the clutches of a killer. Certain the strange occurrences are connected, Beth struggles to stay focused on the story as her relationship with Detective Ethan Moore takes a tragic turn. Can she figure out what is going on and stop a killer, or will she become another one of the victims?

What they're saying about Under the Moon's Shadow:

"...it was just what I had hoped it would be. After the first book, I looked so forward to the second, and it did not disappoint! I flowed right through it, not able to stop reading, and now I cannot wait for Book Three."