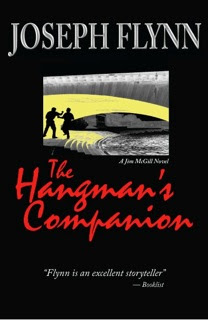 The Hangman's Companion by Joseph Flynn


Always a good sport, Jim McGill, the first private-eye to live in the White House, agrees to accompany his wife, the president, to London to be her escort at a dinner given by the queen—yes, the one who lives in Buckingham Palace. Problem is, he’ll have a week in England beforehand, while the president attends a G8 meeting, with nothing to do.

Then a client comes to McGill, the daughter of a former Chicago cop McGill knew but didn’t like when he was a captain on the CPD. McGill’s former colleague went to Paris to scatter the ashes of his late, French-born wife in the Seine. While tending to that solemn obligation, the former cop managed to get into a brawl with and kill France’s national sports hero. The guy from Chicago claims he was only saving a blonde woman from being beaten by the Frenchman, as French law actually required him to do. Only problem is, the blonde has disappeared.

The former cop’s daughter asks McGill to find the woman and save her father.

Beats glad-handing the locals in nearby London, he decides. He just has to wrap up the case in time to get to dinner with the president and the queen.

ForeWord Magazine called The President’s Henchman “marvelously entertaining.” Its sequel, The Hangman’s Companion, is even more fun. With a French accent.

Five five-star Amazon reader reviews: "A fantastic read." "I love the new Joseph Flynn thriller." "Highly recommend." "Keeps getting better." "This is a must read." 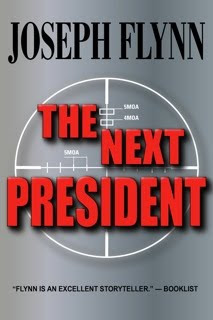 The Next President by Joseph Flynn


J.D. Cade came home to southern Illinois from Vietnam and thought he’d never have to kill again. He was wrong. Someone starts blackmailing him. Not only does this new anonymous enemy know J.D.’s darkest secrets, he also implicates J.D.’s son in a death that could reignite a blood feud. The blackmailer wants J.D. to use his deadly skills to assassinate Senator Franklin Delano Rawley — the first African-American with a chance to become president of the United States. In order to save his son, spare Rawley and emerge alive, J.D. must somehow find out who is behind a conspiracy that could change the fate of a nation.

(First published by Bantam Books in June, 2000 — eight years before the election of Barack Obama.)

"Flynn is an excellent storyteller." — Booklist

"Flynn [is] a master of high-octane plotting." — Chicago Tribune
Posted by Holly Hook at 8:00 PM