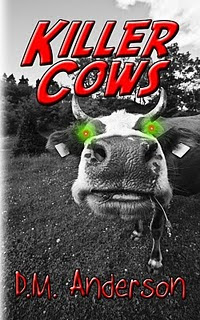 They're big! They're angry! They smell bad! They're coming!

The only thing standing in their way is a lonely 14-year-old, whether he's ready or not... Randy Meyer is the new kid in Satus Creek, a tiny farm town where nothing ever happens, and his days are filled with tedium. Then one summer afternoon, a meteor crashes nearby. It's just the first in a series of events that will not only change his life, but threaten the entire planet. Soon after, vicious cows are on the rampage all over the country, and they're not of this Earth! Armed with a newly-discovered flying saucer he doesn't know how to fly, and a misfit group of new friends he doesn't entirely trust, Randy is forced to grow up fast if he's going to make decisions that will not only help him fit-in with his new peers, but save the world from a fate worse than death!

"I loved this book! It has everything ...... Action, suspense, romance.......Cows will never look the same to me again! This book will appeal to young adults and over 50ers like myself. I enjoyed how the main character, Randy, brought together an unlikely crew to save the world.

Even though I am as about as far from being an adolescent boy as humanly possible, I thoroughly enjoyed this book and highly recommend it to anyone over the age of 8. It is fast paced with something for everyone from SciFi to romance, with lots of adventure, excitement and saving the world thrown in between.

With an interesting cast of lovable and well developed characters, there is someone for everyone to relate to, and I feel as if I have made a wonderful group of new friends. I really hope I will see more of Randy and his crew in future books."--Amazon Reviewer


"Randy Meyer and his mother have recently moved to fictional Satus Creek, Oregon from Portland. They've moved around a lot because of difficult financial circumstances, and Randy hates being the new kid.

But then a meteor crashes on a nearby farm, and a mysterious cow starts trying to run down the town bully...and then the world. And only Randy and his friends can stop them!

Killer Cows was really fun to read, despite my not being an adolescent boy. Yes, there is fart-joke humor, but it's not the focus of the book. It's just a fast-moving, fun story that young people will enjoy.

I think this book will be most enjoyable for ages 9 and up, but like I said, it was fun for me to read, too. I look forward to reading more books from Mr. Anderson."--Amazon Reviewer
Posted by Holly Hook at 8:00 PM