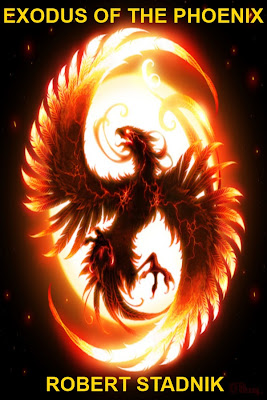 Exodus of the Phoenix by Robert Stadnik

Humanity has been kept bound within the solar system for decades by a hostile alien race known as the Screen. Ships attempting to pass beyond Mars have been destroyed without reason or provocation and communication with this mysterious alien race have failed. Both the military and tri-planetary government have resigned themselves to the notion that humans will never explore the stars, but hope springs forth from the most unlikely of places. Humanity's destiny lies with two inexperienced cadets and an unproven experimental starship. Join cadets John Roberts and Julie Olson as they are introduced to the EXODUS Project and offered the chance to free humanity from its oppressors. This is the first novel of the Exodus series.

"I found the plot was drawing and interesting and the characters are quite vibrant. One of the main characters in particular, John, is quite amusing. I really had trouble putting this book down and when it was finished, I immediately wanted the sequel but it's not out yet. When it comes out, I'm grabbing it."--Amazon Reviewer

"I've been looking for a long time for a science fiction novel with captivating characters, and I think I've found it. By the end of the book I felt I had a genuine connection to the characters. The author does well in capturing the persona of each character. Each has their own strengths and faults, and such attributes affects how they handle situations they find themselves in. This is one series I plan to stick with to the very end. I'm anxious to see how the characters handle their first steps into deep space. Who will they encounter? And will they accomplish their main mission?"--Amazon Reviewer
Posted by Holly Hook at 8:00 PM