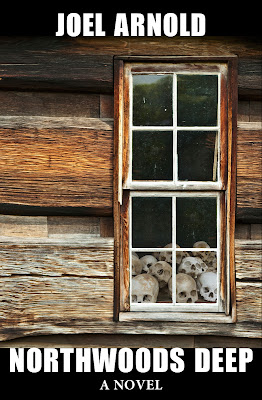 
Deep in the north woods, two sisters become lost; one stalked by a murderous ex-husband, the other unable to rid herself of the leeches that appear mysteriously on her skin.

All are drawn to an old, dilapidated cabin.

Inside lives an old man with awful urges, accompanied by a Rottweiler possessed by something…unnatural.

But it’s what resides beneath the cabin that they should really be worried about.

Please join award-winning author Joel Arnold on a ride over the river and through the woods straight into terror in his newest novel, Northwoods Deep.

"This is the kind of horror that I can get into. Lost in the woods, and old cabin, a crazy old guy.....yeah, it's going there.

Carol and her sister Brenda are taking kind of a canoe trip to really get away from Carols ex-husband Mitch, who is stalking her. He ends up hearing about it, and follows.

When this happens, her brother Jack starts to have dreams about his mother April (who he was responsible for killing in a car crash) telling him that his sisters were in trouble. So he and his father Allen, who has still never forgiven him for the death of April, goes after them, not exactly knowing when they hit the water.

Everything comes to a head at the Cabin in Northwoods deep where Agustus Meyer lives. He is the guardian of an ancient evil. Mitch is the first to really find out what happens, and it's here where the twisted Hansel and Gretel story comes into play, as it seems he's "fattening" them up for some sort of sacrifice.

I can't really go much more into detail as it will spoil the story, but I found it a real page turner."--Amazon Reviewer


"A sister's love, a father's pain, a brother's guilt, a psycho ex husband, a creepy old hermit, and an Indian legend all come together in a story so descriptive and well written that I could almost smell the woods and hear the river. There are not many books that I assign the overused phrase of "page turner" and it may seem like I'm gearing up to call Northwoods Deep one of them....

Well I'm not. Because for me, this book was more rare than a page turner. I did not devour it in one sitting. This book was savored slowly over several days, even though I did not want to put it down. I forced myself to put it down. To make it last, simply because I don't know when I have enjoyed a book more, and I didn't want it to end. I do know it will probably be a long time before I find another one as good. I will definitely be keeping an eye out for more from this author."--Amazon Reviewer
Posted by Holly Hook at 8:00 PM