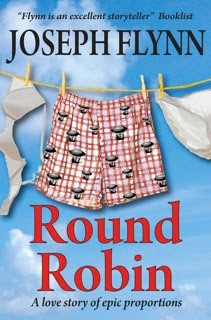 Round Robin by Joseph Flynn


Round Robin Phinney…She’s 230 pounds of bad attitude. She dishes out sandwiches and insults to the customers at Screaming Mimi’s deli. She takes a dim view of people in general and men in particular. Her home is her sanctuary. She has an apartment upstairs. Downstairs, she’s created a private park, lushly landscaped, dotted with ponds, furnished with two Chicago Park District benches. Manfred Welk is what Charles Atlas would have looked like if he’d been serious about lifting weights. A former Olympic powerlifter for East Germany, his ex-wife turned him in for spying. Brought to Chicago after the fall of the Berlin Wall, he needs a place to live.
When cold weather hits and Robin’s furnace goes out, the plants in her park start to die. Worse, she has no money for repairs — but she does have a small vacant apartment in her basement. Something she might swap for the services of a live-in handyman. After interviewing a number of prospective fix-it people, Robin finds, to her great horror, the best choice is a giant German with CIA connections. That’s bad enough, but the guy turns out to have a kid, a blue-haired prepubescent brat named Bianca who’s been raised in a brothel. Robin, Manfred and Bianca all have their demons to cast out. You’ll have a grand time watching as they do.

"A lot of fun to read."--Amazon Reviewer 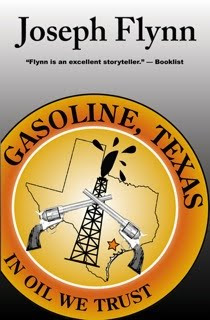 Laddy Johnson may or may not be the unacknowledged love child of the late President Lyndon Baines Johnson. But one thing's for sure: After fifteen years of being a Hollywood stuntman, Laddy's back to run for mayor of his hometown of Gasoline, Texas. His opponent is incumbent Edwin Win-Win Winslow. Win-Win is the quintessential Texas good ol' boy. A former star lineman at Texas A&M, Win-Win now owns Texas Rolling Stock, an upscale SUV dealership that sells internal combustion monsters like gas was still 25¢ a gallon. Which in Gasoline it still is. The town has its own oil field and refinery. And the Municipal Field is what the election is all about. Laddy vows to keep it. Win-Win wants to sell it to Big Oil, which is getting nervous about the idea of anybody in the country still having access to affordable fuel. Win-Win promises that every homeowner in town will get a windfall payment that will make the sale a good deal. Laddy cautions that Big Oil is way too slippery to trust. Who will win? Will the Winslow dynasty be extended another generation? Will Laddy ever find out who his daddy is? Will he marry his first love, now a famous movie star? Or will he chuck everything to take up with Win-Wins long lost daughter, Hayley? Finding out is a gusher of fun.

"I can't wait for Flynn's next book."--Amazon Reviewer
Posted by Holly Hook at 8:00 PM