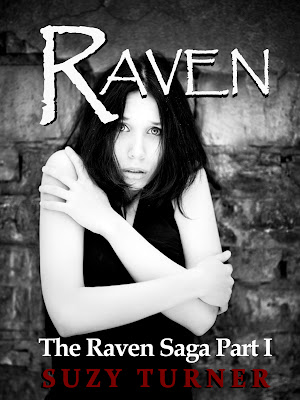 
Raven is a fantasy novel for children and young adults set in the beautiful province of British Columbia.

After the inexplicable disappearance of Lilly Taylor's parents, she has no choice but to move to Canada where she unravels some frightening yet intriguing family secrets...

Her whole life had been based on a lie. Lilly had grown up in a loveless home with a father who she had barely ever seen and a mother who was... well, not very motherly.
After they mysteriously disappear without a trace, Lilly is sent to Canada where she finds a whole new way of life. A life filled with love and people who care for her. But that's not all she discovers, Lilly also finds out that she isn't who, or what, she thinks she is.

Lilly has a very special ability and it's just a matter of time before her true self starts to shine. And when it does, her life will never be the same again.

"Wow Wow Wow, I don't even know where to begin with this review, so let me start here. Usually I am very skeptical when it comes to reading books with a paranormal aspect and I think that it's because they are so far-fetched in regards to reality that I have a hard time connecting with the characters, but this book changed that for me for sure. In fact, i'm going as far as to say that THIS IS the BEST paranormal YA book that i've ever read.

Lilly is stuck in England with an unloving mother and a barely there father, so when both of her parents disappear, Lilly gets uprooted and moved to her grandfather who she's never met halfway across the world in British Columbia, Canada. Lilly is in for a lot of suprises though, when everything and I mean everything she thought she knew about her life gets turned upside down!

This story honestly gripped me from the first page and held on tight until the last page. My only complaint about this book was that it wasn't long enough, I got to the last sentance and was devastated that the story was over, but thrilled to learn that this is the first in a series. Book 2 is due out this September, and you better believe i'll be counting down the days until I can get my hands on this book. I honestly could sing my praises for this book for days, but instead i'm going to give you a word of advice and tell you to go pick up this book and read it, I promise you will not want to miss out on this series!"--Amazon Reviewer