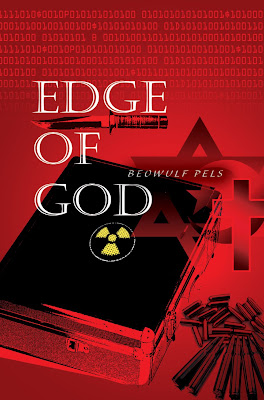 Edge of God by Beowulf Pels

Ex-CIA covert operator Martin Dallas has never failed a mission, not in the jungles of Cambodia or the deserts of the Middle East. After Wahhabi terrorists murder his wife, Dallas leads an elite mercenary team in a decisive covert op designed to end terrorism.

Financed by an American industrialist, Dallas secures suitcase nukes for his mission and prepares to strike at the heart of radical Islamic terrorists. At the same time, the CIA and a SEAL team have only hours to save tens of thousands of Americans from dying in a nuclear inferno triggered by suicide bombers who have already penetrated U.S. waters.

While tracking the nuclear-armed terrorists and deploying the first of his weapons Dallas slides back into nasty habits like kidnapping, torture, and murder. When it’s time to detonate his first bomb, he realizes he’s progressively losing his humanity and is becoming what he seeks to destroy. As Mossad and the CIA close in on him and his bomb, Dallas must quickly decide whether he’ll incinerate thousands of civilians…or salvage his soul by allowing his mission to fail.

"Pels bridges the gap between Coonts and Clancy with his technological detail of a Clancy thriller and the imagery of a Coonts story line.

"Edge of God" takes you into the real time world of terrorism and choices that the men and women who fight the world's bad guys must make. Pels heightens the tension so well, that I actually found myself with an increased pulse-rate and trying not to skip pages ahead to see what happens. The pacing and writing are simply superb and unmatched.

Pels writes his book with a high level of technical knowledge, and it simply amazes me that he knows his stuff so well. This adds even more to the air and feel of authenticity.

Pels gives nothing away, and only slowly gives you details as to what your hero is up to. His technique kept my curiosity high, so I was hooked into the story itself. It was good to have the mystery of the story line revealed a bit at a time, it kept me thinking just what is going to happen."--Amazon Reviewer
Posted by Holly Hook at 8:00 PM