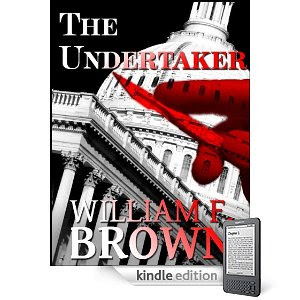 The Undertaker by William Brown


Pete Talbott is a native Californian and harried Boston computer wonk still grieving over the death of his wife when he finds himself at the wrong end of Gino Parini’s .45 reading his own obituary torn from the morning newspaper. He figures it is all a big mistake, until Parini shows him his wife’s obituary too; and this is a mystery Talbott can’t leave alone. From a funeral home in Ohio , to car chases on the Dan Ryan, snipers in New York ’s Washington Square , sleazy lawyers, corrupt County sheriffs, mafia hit men, the FBI, an army of Chicago cops, and an unforgettable scene in the upper berth of an Amtrak Train, "The Undertaker is a thrill ride with a touch of humor and romance. Someone with a penchant for sharp scalpels and embalming tables is planting bodies under other people’s names; and if he doesn’t stop them, he and his quirky new girlfriend, Sandy Kasmarek, will be next on the Undertaker’s list.

What they're saying about it:
(from 12 5-star reviews)

“The Undertaker by William F. Brown has it all -- suspense, mystery, action, intrigue, politicians, conspiracy, thrills, and a bit of romance. The reader is quickly drawn in to this book. There are lots of "bad" guys… The plot is full of surprises… once I started reading I couldn't stop. This is not a book I want to read alone late at night.”--Anne Boling for ReadersFavorite.com

“The story line was the first thing to grab me... William Brown did an excellent job in pulling me in and keeping my attention throughout the book. There wasn't a rest in the plot and more importantly, no down times. It was constant action and suspense.”--Melissa, The Sunday Book Review – Good Reads

“Don't miss reading this book...it has a little bit of everything.....frightening scenes, clever twists and turns, love, and humor. I found myself laughing out loud, crying, and also being afraid for the characters.”--Silver’s Reviews
Posted by Holly Hook at 8:00 PM