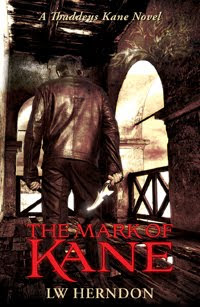 The Mark of Kane (A Thaddeus Kane Novel) by LW Herndon

Human sorcerers bent on power are disrupting the underworld with demonic possessions and L.A. with murders. Half-demon half-human, Thaddeus Kane is the bloodhound for his clan, charged with finding the sorcerers and destroying them. His personal rules have always been clear—save his clan, protect innocents, and survive. Solicited for help by a demon from another clan, Kane’s first instinct is to blow her off. Until she dangles his one weakness beneath his nose—a mortal threat to prophetic children. Loyalties stretched in his race to find pre-emerging Irins and wizards, Kane struggles to ward off the danger to his clan. His previously harried, but manageable, life now swirls with secrets, until one fatal shot changes everything he believed about his past, turning the table on enemies and allies alike.

"I'm always excited when I discover a new writer. LW Herndon is a new find. The Mark of Kane (A Thaddeus Kane Novel) is one such find.

The story starts as it means to go, an adrenaline rush with some quiet moments. LW kept me on my toes throughout the book. I was never sure what would happen next.

Kane is a half-breed, human/demon, or is he? He's on the hunt for human sorcerers bent on power. They are killing (draining their victims of their power and life force) demons and young humans or worse. To say more will be a spoiler. However, I will say the demons are multi-layered and as with Kane, not what they seem.

But these sorcerers didn't count on Kane, the bloodhound for his demon clan. He is charged with finding and destroying the sorcerers. He lives by his own rules: save his clan, protect innocents, and survive. All that is put at risk when he's solicited by a demon from another clan to save humans who are prophetic children, the Irins and then shock, wizards. In this world, wizards have always become sorcerers. Not if Kane can prevent it. He's out to save the children and train the budding wizards thus protecting them from sorcerers.

This is a wonderfully told story of how appearances are deceptive and sometimes your life is a lie. This book isn't a romance. It's a true urban fantasy--one that sucks you in and holds you tight until the last word. The ending left me with my mouth open and wanting more."--Amazon Reviewer