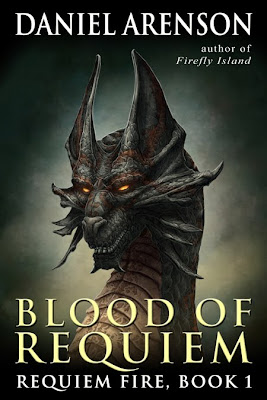 BOOK ONE: BLOOD OF REQUIEM

Long ago stood the kingdom of Requiem, a land of men who could grow
wings and scales, breathe fire, and take flight as dragons. Requiem
ruled the sky.

But Dies Irae, a tyrant leading an army of griffins, hunted Requiem's
people, burned their forests, and shattered their temples. Requiem
fell. This ancient land now lies in ruin, its halls crumbled, its
cries silenced, its skeletons littering the burned earth.

In the wilderness, a scattering of survivors lives in hiding. The
griffins still hunt them, and every day promises death. Will Requiem's
last children perish in exile... or once more become dragons and fly
to war?

"The vivid image on the cover drew me to this novel, and I am happy I have read it.

Blood of Requiem is a well-crafted novel, with strong, flowing prose, well-developed characters and a fast moving plot that keeps the reader engaged. The story follows the struggles of a few survivors of the Vis Requis to evade the evil King Dies Irae, who hunts these dragon people he calls weredragons mercilessly, aided by a host of griffins.

The plot is quite straightforward, with a few minor subplots. It allows for less intrigue than I usually like in my fantasy, but the storytelling and pace made up for it with ease. The worldbuilding is not earth-shattering, but well-developed and interesting enough, and there are some intriguing characters, most notably those of Benedictus, his daughter Agnus Dei and his estranged daughter and enemy Gloriae and young Kyrie.

My main gripe is with the character of Dies Irae, who is just your average, cruel, sadistic and bitter villain. I know that the black-and-white struggle of good against evil is still a strong theme, but I would have preferred to see a bit more grey. Despite this minor complaint, this was a fast and furious read, just like one of the many battles between Kyrie and the griffins."--Amazon Reviewer
Posted by Holly Hook at 8:00 PM