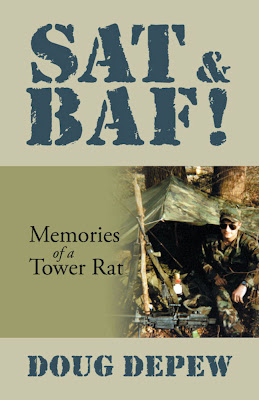 SAT & BAF! Memories of a Tower Rat by Doug DePew

The year is 1986. The Cold War is five years from its end bringing a close to a nearly fifty year standoff between the United States and the USSR. The Soviet Union is outraged over a large number of Pershing missiles being kept in West Germany. President Ronald Reagan is proposing the Strategic Defense System, also known as "Star Wars", further raising the heat on the Soviets. The USSR is in turmoil over General Secretary of the Communist Party, Mikhail Gorbachev, proposing a revolutionary policy of Glasnost or "openness" toward the west. They are also mired in a war of conquest in Afghanistan. Leftist, terrorist groups such as West Germany's Red Army Faction (RAF) and France's Action Directe (AD) are threatening further attacks on western military installations. Thousands of protestors are regularly picketing sites that house nuclear weapons. It appears nothing can solve this standoff except complete, nuclear annihilation or capitulation by one of the sides. The pressure is rising quickly in the Cold War.

One company of Infantry stands between all of these enemies and live Pershing II nuclear missiles.

In this very personal memoir, the author carries the reader through his two year tour as a young Infantryman in Charlie Company, 2nd Battalion, 4th Infantry Regiment (Pershing). He shares with you the highs and lows of life in the boiler pot of a Pershing unit and in Heilbronn, Federal Republic of Germany. He takes you to the site, to the field, and out on the town as he earns his way back to "the world". This very readable adventure is both brutally honest and irreverently funny. For the first time, someone from inside 56th Field Artillery Command (Pershing) speaks out on exactly what it was like to serve in that command during the very momentous period at the end of the Cold War. You will experience the brotherhood that is exclusively found in the Infantry which was only made stronger by the unique conditions in C 2/4 Infantry. The narrative is extremely personal, but it is written in a way that is universal and will be widely enjoyed by any audience. This book is a rollicking adventure from beginning to end. The author explains the tremendous toll it took on the minds, hearts, bodies, and souls of the men who volunteered to stand between the Eagle and the Bear. Someone is finally sharing what millions experienced in this very entertaining memoir. You will stand by the author and see the world through his eyes. You will live it.

The Cold War has become a footnote at the end of many history text books. Even though it influenced the world more than any other period with the possible exception of the Renaissance, it is normally left with a short period at the end of a history class. Millions of Americans served overseas in the Cold War, and very few of them have told their stories. There is an entire generation that only vaguely remembers hearing something about the Cold War.

"SAT & BAF! Memories of a Tower Rat" is a first step in correcting that situation.

"I got the book last Thursday night and was finished by Sunday. It brought back so many memories. Doug thanks for putting it down in black and white. My wife is reading it now and Laughing as much as I did. It was funny reading about Frank he was one of a kind. It has been 20 some years and I still think about that place everyday. It was the fasted three years of my life. My wife was saying tonight that you hit it all, Site, drinking, Field, Drinking, Fighting at the clubs, Drinking. Oh ya did I mention drinking. I think it was our way of dealing with it all. Thanks for bring it back. This Book is one of a kind and a great read. My young son picked it up and started reading it. He ask me if we really lived like that. All I could do was smile and say yes...Larry"--Amazon Reviewer
Posted by Holly Hook at 8:00 PM