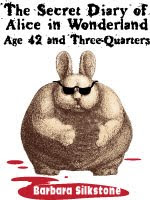 The Secret Diary of Alice in Wonderland, Age 42 and Three-Quarters by Barbara Silkstone

This urban fantasy is set in Miami and London. Fans of Stephanie Plum will cheer for Alice as she watches her back in attempting to keep her head, while being stalked by Nigel's daft ex-wife and inept, but dangerous mobsters. Alice's world is filled with memorable characters strangely reminiscent of Alice in Wonderland. She's guided through her dangerous adventure by her own Cheshire Cat.

Nigel, a chubby John Cleese with serious dress-code problems, whisks Alice to England. Alice sees him as her White Rabbit rescuer. The plot trips along at a cracking pace with Alice flinging zingers like a drive-by shooter.

After Alice discovers a gangster's freshly beheaded body in his Miami mansion, she launches a desperate self-defense in a kangaroo court. The main witness against her is Algy Green, a bumbling cockney swindler who super-glues his bat wing ears to his head and commits perjury for theme park tickets. But in the middle of the trial a small piece of evidence opens her eyes.

This is a book that catches you by surprise again, and again. At it's base, it's a plot about murder and some pretty vicious characters used to getting their way. But there are subtle romantic threads woven in and out of the story. We have Nigel, who morphs from John Cleese to a sort of rumpled buffoon, and then to other things as well. There are are crazy women of more than one stripe - some very loud, and some just involved in things over their heads.

Alice Harte only wants out of a bad job, and the chance to get away - preferably to England. Her employer is a sociopath who has no intention of releasing her from her employment contract. He has his evil cohorts and a lineup of judges, lawyers, crazy women and thugs arrayed against her, and that's not the best part.

The best part is that every time the book feels as if it's fallen down a rabbit hole and gone silly...it's only dropping down a roller-coaster hill to rush back up the other side.

The Alice in Wonderland references are woven in cleverly, bringing smiles when a heavier hand might have made them jarring. In short, this is a whimsical, funny, sometimes tense novel with a fast pace and a satisfying conclusion. Highly recommended"--Amazon Reviewer


"Written very much in the style of Janet Evanovitch, but with a strong dash of the surreal, The Secret Diary is an entertaining jaunt through a mad world of Miami real estate, pill-popping neuroses, TC's "Phantom fish-flingers" and would-be English Lotharios. Alice, the heroine, is a very engaging character; a tough, sassy woman whose efforts to sort her life out go strangely wrong and yet who manages to sort herself out with none of the eyelash-fluttering, hanky-dropping ineptitude that is my main reason for avoiding romance.

She tries very hard to persuade herself that Nigel Channing is her Mr Right - and although it is very funny to read, she is written with enough humanity and truth that you might be laughing but it is with her rather than at her, and you don't think "Stupid woman!" so much as recognise the times you've done the same...

Of the other characters, Maris is entertainingly nuts; Leslie chews the furniture with great elan; Ron is pitched just nicely, supportive and low-key; and actually I rather liked the over-the-top rantings of Elizabeth, which might have been a bit too much in a different book but in the context of the whole "Alice-in-Wonderland" theme were fairly apt. The Lewis Carroll quotes were nicely placed and flavoured the text without giving too much away at the beginning of each chapter!"--Amazon UK reviewer
Posted by Holly Hook at 8:00 PM