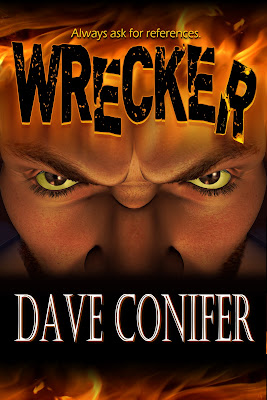 Jane Havelock is coping a day at a time in a bad marriage when her husband Steve hires simple-minded handyman Rob Manteo to work around the house. After overcoming her initial revulsion, Jane finds shelter in a growing friendship with Manteo, an enigma who seems to know more than he lets on. Struck by his unstable and morose nature, she digs into his past. But by the time she uncovers a horrible secret and realizes that it wasn't chance that brought Manteo into their world, it may be too late.

"One of the Best Thrillers I've Read in a Long While.

In two breathless sittings, I raced through Dave Conifer's "Wrecker." I haven't burned through a book that quickly in quite some time, but Conifer's latest novel is a very gripping read from the get-go.

Steve Havelock thinks it's his lucky day when he finds a handyman willing to work for bottom dollar. His wife, Jane, is none too happy though, because there's something decidedly off about Rob Manteo. But despite Jane's misgivings, Steve hires Manteo anyway. After all, a bargain is a bargain! Never mind that they have a 4-year-old daughter in the house...

And that's the setup for this fast-paced thriller, which twists, turns, and goes around the bend many times over.

Dave Conifer is at the top of his game here, with his latest effort ranking right alongside the best of Joseph Finder, Harlan Coben, and indie standout Eric Christopherson. Featuring rich, detailed, layered characters that will keep you guessing and a plot that never hits the pause button, "Wrecker" kept me hooked all the way through. It almost "wrecked" my sleep schedule because I didn't want to put it down and go to bed. A highly absorbing read."--Amazon Reviewer
Posted by Holly Hook at 8:00 PM