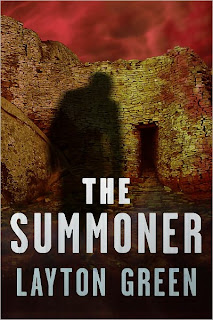 The Summoner by Layton Green


A United States diplomat disappears in front of hundreds of onlookers while attending a religious ceremony in the bushveld of Zimbabwe.

Dominic Grey, Diplomatic Security special agent, product of a violent childhood and a worn passport, is assigned to investigate. Aiding the investigation is Professor Viktor Radek, religious phenomenologist and expert on cults, and Nya Mashumba, the local government liaison.

What Grey uncovers is a terrifying cult older than Western civilization, the harsh underbelly of a country in despair, a priest seemingly able to perform impossibilities, and the identity of the newest target.

The first work in a globe-hopping series whose protagonists investigate the world’s most bizarre and dangerous cults, The Summoner is a stylish, haunting novel of mystery and suspense that will linger long after the last page is turned.

“Green writes like a dream. Dominic Grey is a fascinating protagonist, and his quest for justice in the heart of a troubled African city gripped me from start to finish. The Summoner also beautifully captures Zimbabwe's diverse and conflicting landscapes — both urban and rural, ancient and modern. The result is a fast-paced and searing narrative that offers a glimpse into a world of religion, politics, and culture few could imagine. The next installment of Green's suspenseful storytelling and Grey’s next journey can’t come soon enough!” — Melody Moezzi, Award-winning Author, War on Error

“Layton Green has written a tale with supernatural and political undertones that unravels with ever increasing suspense . . . The book is plain terrific.” — Richard Marek, former President and Publisher of E.P. Dutton

“I moved a little outside my comfort zone with The Summoner, and I am glad I did. A blend of action, history, anthropology, thrills, and chills, all delivered with a mature, polished voice. I am eager for more from this author.” — Scott Nicholson, Kindle Bestselling Author
Posted by Holly Hook at 8:00 PM