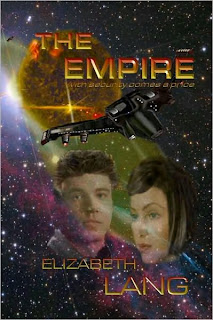 The Empire by Elizabeth Lang


The galaxy is in chaos as alien invaders from the Andromedan galaxy try to destroy humanity. The only ones standing in the gap is a conglomeration of planets and alliances that calls itself, the Empire. But there is a problem in this Empire. It is becoming increasingly totalitarian as security becomes more important than the freedom of its citizens.

Within this dystopian world, a brilliant scientist tries to survive. Lt. Adrian Stannis, a man hiding from a troubled past and people who want to use him. He tries to distance himself from everyone, but a young woman breaks through his guard and is intent on helping him.

Will he be able to escape the attentions of those in power or will his past catch up with him?


"Elizabeth weaves a clever mixture of love, deceit, ambition and brutality in a story about a human Empire largely devoid of any kind of feeling for its many subjects...I was totally consumed, wanting to know what would happen next."--Jack Eason, author of Onet's Tale
"Plenty of action, well developed and credible characters, plus deeper levels of thought than appear at first made for enthralled reading."--Amazon reviewer
"I have never felt so involved in a (book) as Elizabeth made me feel with the brilliant characterization of Adrian Stannis, Kali Mirren and the very awful Sester."--Biola Olatunde, author of Blood Contract
Posted by Holly Hook at 8:00 PM