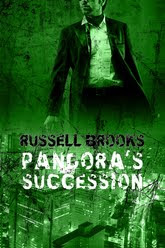 
CIA operative, Ridley Fox, never stopped hunting his fiancée’s killers—a weapons consortium called The Arms of Ares. When an informant leads him to an old bunker outside of Groznyy, Chechnya, Fox is captured, beaten, and left for dead. When the informant rescues him, Fox learns that his capture was no coincidence: someone had set him up—possibly another government agent. Fox barely escapes after learning that Ares has acquired a hyperdeadly microbe—called Pandora—that is believed to have wiped out ancient civilizations. The trail leads Fox to Tokyo where he discovers that people within the Centers for Disease Control (CDC) and Japanese Intelligence want Pandora for themselves. The only person Fox can trust is a woman from his past who he nearly got killed.

"Do you enjoy reading non-stop action? Then Pandora's Succession is definitely the book for you, as it was for me. Russell Brooks had me on the edge of my seat wondering how in the world the main character, Ridley Fox, was going to stop the bio-weapon, Pandora, from being spread and ending human existence, as we know it. This book was riddled with moles, spies, evil scientists, and ninjas, to keep you wondering just who the good guys were.

The plot was fantastically written. The interaction between characters allowed you to see that we were leading up to world destruction with little time to stop it. Detailed actions made me feel as if I were watching fight scenes play out before my eyes, even with little knowledge of combat assaults and weapons.

The characters themselves were well-developed, not too much detail, but just enough to feel as if you know them (I'm glad I don't know some of them!). I found myself rooting for Fox throughout the entire book. Others had their secrets revealed and took me for a 360 spin.

I'm going to admit it now, I love action movies, such as "Bourne Identity", but I've never really read one. This was my first and I was absolutely strapped in for the ride of my life! I look forward to more roller-coaster rides from Russell Brooks!"--Amazon Reviewer


"When it comes to choosing books to read and discuss, I find myself having to think of titles that will impress and engage both my male and female demographics. With PANDORA'S SUCCESSION by author Russell Brooks, that job has been made easy.

The book allows the reader to take a journey that is filled with both good and evil, and the importance of knowing you are on the right side. The characters are developed in such a way that you have just enough backstory to understand their relationship to each other as well as the ability to get to understand the choices they make.

PANDORA'S SUCCESSION is not one that women will have to wonder if men will read it...they just have to make sure they are able to download their own copy! A true literary success for everyone."--Amazon Reviewer
Posted by Holly Hook at 8:00 PM