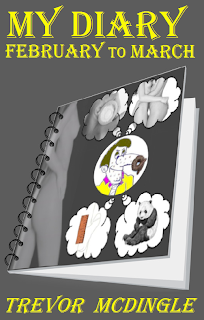 
Trevor McDingle, a European citizen living in England (part of the United Kingdom), receives a diary as a twenty-fifth birthday present from his loving mother, which he uses to methodically document his life.

Through reading Trevor’s diary it becomes possible to gain an insight into this obnoxious and rather inadequate man by means of his revealing and honest daily log, in which he tends to describe countless pointless, and often hilarious, goings-on in great detail.

Trevor’s inability to recognise flaws in his personality, combined with his ludicrous outlook on life, results in him believing that he excels in almost all things. After all – once any man has wholly convinced himself that he has achieved perfection, then surely problems encountered in life must have been caused by the failings of those less capable?

Trevor’s diary entries tend to be rather uninhibited in both their candidness and desire to describe unsavoury personal inflictions and habits. Whilst one can’t help but laugh at Trevor’s suffering and feel despair at Trevor’s evident lack of morality, one might also wish that Trevor had occasionally been a little less forthright in describing certain personal traits.

As the days pass, Trevor manages to find true love with blonde Angela and everything in life, from his perspective, seems perfect.

Alas, Trevor’s idyllic life is very soon thrown into turmoil when his father’s past catches up with him, introducing Trevor to a world of theft, abduction, violence and murder. None of those concepts are alien to Trevor, but he had previously been more used to inadvertently instigating such acts rather than finding himself on the receiving end.

With his loyal friends at his side and tooled only with his intellect and his nippy and practical small car, Trevor has the unenviable task of finding a way to defeat the criminals whilst protecting his young girlfriend and saving his father from otherwise certain death.

One might be of a mind to reason that it is ill-advised to confront hardened criminals whom have shown willingness to torture, maim and kill. However, this is Trevor McDingle’s world and, in his eyes, all other men are inferior. Trevor is not constrained by conscience and is thus free to seek retribution against those who would dare act against him.

So, by reading through Trevor’s diary we first begin to see an implicitly-described and somewhat bewildering love story unfolding before we are guided into a criminal underworld to experience torture and murder. Throughout, we are privileged to share in Trevor’s many riotous misadventures.

"Genuis - a new genre, comedy of the repellent!"


"I don't know where you got your material but I'm sure you have spoken to a couple of ex boyfriends of mine - some of the things are a bit too true to life - lol.
I really enjoyed it - a bit repetative but then so were some of my ex boyfriends come to think of it.

I think men will love this book and it will remind women what a lucky escape they've had in the past after knowing a Trevor McDingle.
Thanks for the laugh.

Reader beware - not for the easily offended ;0)"


"How do you describe this book?

It is rude, offensive, repelling, revolting, sick, warped - in fact, everything bad you can imagine.

The why give it 5-stars? I hear you ask.

Because it is ridiculously funny. The offensive stuff all shows the sort of man Trevor McDingle is, and you soon come to hate him and absolutely enjoy all the nasty and very funny things that happen to him.

I can honestly say that I've never laughed so much or so loudly reading any other book. This is a work of genius by an apparently very twisted mind.
Give it a go - you get a lot of laughs for your money."
Posted by Holly Hook at 8:00 PM