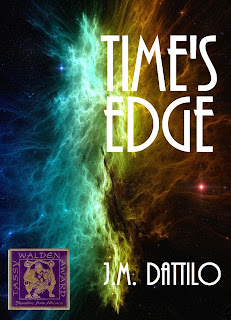 Imagine being a Commander in the Galactic Armed Forces and on a mission so secret that you can’t be told what it is.

Imagine being thrown into another time and place with no explanation.

Imagine being stuck with a smart-mouthed computer, an ultra-correct android, and a seven-foot tall monster who knows both Santa Claus and Shakespeare.

Imagine being lost in time with a woman who may either be falling in love with you or trying to kill you.

Imagine being in a place that sits between worlds, dimensions, and times.

Time’s Edge is the first place winner of the Tassy Walden Award, a literary prize given by the Shoreline Arts Alliance of Connecticut. A fast-paced, lighter tale, the story blends adventure, humor, and romance in a fun-to-read mix of sci-fi and fantasy.

"The scene descriptions in this book are magnificently detailed and vivid. The theme of light and color is brilliantly interwoven throughout the story. This novel turned into a film would be a spectacular piece of art."--Amazon Reviewer

"You know it's a great book when you get to the last page, close the book and you feel like you just saw a movie. The descriptions were so well written that you could picture everything page by page. I'm hooked and want more!"--Amazon Reviewer

"The author does a phenomenal job creating characters, worlds, cavernous rooms and compounds as if you were walking right along with the characters in the book, much like the descriptive details presented by renown authors such as Stephen King. The rooms were painted so vividly in words that you could envision every artistic curve in the millwork that created very unique rooms. The detail makes you wish you could walk among the heroes of the story."--Amazon Reviewer
Posted by Holly Hook at 8:00 PM