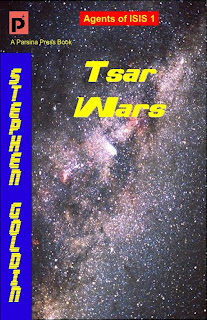 Amazon.com (for Kindle)
Smashwords (all eBook formats)
Barnes and Noble


With humanity scattered across the galaxy on hundreds of worlds, the Empire is the only force for order across the stars. Without it, interstellar conflicts would bring chaos and billions of deaths.

But the tsar has been in a coma for five years now, and his grand-niece, the only apparent heir, is only 14 years old. In this hour of crisis, the task of preserving the Empire falls to two untrained--but far from unskilled--agents of the Imperial Special Investigation Service. Can they make a difference against the vast forces arrayed against them?

The Agents of ISIS series follows the adventures of secret agents who battle a massive, hidden interstellar conspiracy to preserve peace and order throughout the stars.

"I am a space opera fan and was glad to hear about this series by Stephen Goldin.

Having read the Family D'Alembert series many times over the years it was with much anticipation that I started to read Tsar Wars.

I was not disappointed. A story that is both new and familiar at the same time it kept me spellbound until the end.

I do not wish to say too much as I do not want to spoil the pleasure you will get from reading this for the first time just make sure you have time to spare when you start reading as you will not want to put it down."--Smashwords Reviewer
Posted by Holly Hook at 8:00 PM