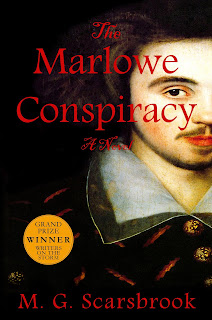 
1593, Elizabethan England: In a turbulent time of wars, famine, and religious persecution, Christopher Marlowe struggles to balance his life as England’s most popular playwright with his duties as a government spy.

Suddenly, when he falls under suspicion of atheism, a capital crime, Marlowe fears his many powerful enemies have launched a conspiracy to have him executed...

With only a few days to clear his name, he quickly enlists the aid of a young William Shakespeare – one of the few friends he can still trust. Together, they race through Marlowe’s tangled life of crime, espionage, and noble connections to expose the conspiracy and save him from the hangman’s noose.

But will anything save a man as troubled as Marlowe?

"The idea of Marlowe and Shakespeare together in a story was too good for me to resist. I was hoping for something like Shakespeare In Love, but this is different. It's much better! The story has far more suspense and action. It's like an Elizabethan version of The Bourne Identity!

Basically, Marlowe is torn between his secret life as a spy and his increasingly frustrating 'day job' as a playwright. These two worlds suddenly collide when the Archbishop of Canterbury blames Marlowe's rabble-rousing plays for causing all the anti-religious riots sweeping the country. To stop Marlowe from writing another work, the Archbishop joins forces with powerful noblemen in Elizabethan spy circles, and frames Marlowe for a crime he didn't commit. From then on, Marlowe's time is running out. Aided by William Shakespeare, his co-writer at The Rose Theatre, Marlowe goes on a quest to prove his innocence before it's too late. The investigation takes him through the highs and lows of Tudor England: we see the criminal underworld, rat-infested prisons, shadowy spy rings, as well as all the opulent houses of nobility - even the royal palace! Everything builds toward a dramatic showdown in a meeting house in Deptford, after which nothing will be the same again.

The author does a great job of bringing these characters to life. Marlowe is the daring but troubled superstar of his time, while Shakespeare is his confidante and conscience, displaying subtle hints of the brilliant artist he will become (by the way, for any Marlowe-Shakespeare conspiracy enthusiasts, you should know that this story is not about Marlowe secretly writing the works of Shakespeare!). Smaller characters in the story were also refreshing. For instance, we see an older Queen Elizabeth imprisoned by her own power and legend. And I was especially intrigued by Marlowe's patron Thomas, and his wife Audrey, who live a sham marriage designed to hide their own personal secrets.

The prose style of this novel is great - so much energy - so much attention to detail! The author is a formidable researcher. I loved all the historical milieu, like riding in a carriage through London, and the royal banquet chapters were especially vivid. One of my favorite moments was simply when Marlowe and Shakespeare drink at a London tavern - I could picture all the sights and smells exactly!

Also, as you might expect in a story about playwrights, the dialogue is very clever and witty. In fact, the humor was one of the most surprising aspects of this story. There is something funny in almost every chapter. I particularly liked Topcliffe the 'friendly' torturer!"--Amazon Reviewer
Posted by Holly Hook at 8:00 PM