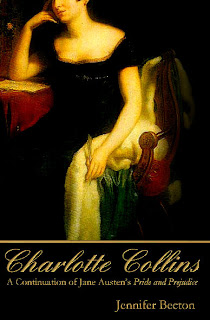 Charlotte Collins: A Continuation of Jane Austen's Pride and Prejudice by Jennifer Becton


When Charlotte Lucas married Mr. Collins in Jane Austen's Pride and Prejudice, she believed herself to be fortunate indeed. Her nuptials gained her a comfortable home and financial security. If she acquired these things at the expense of true love, it did not matter one whit. To Charlotte, love in marriage was nothing more than a pleasant coincidence.

As the years of her marriage dragged by, Charlotte began to question her idea of love as she suffered continual embarrassment at her husband's simpering and fawning manners. When Mr. Collins dies, finally relieving everyone of his tedious conversation, she must work feverishly to secure her income and home. She gives no further thought to the prospect of love until her flighty sister Maria begs her to act as her chaperone in place of their ailing parents. Hoping to prevent Maria from also entering an unhappy union, Charlotte agrees, and they are quickly thrust into a world of country dances, dinner parties, and marriageable gentlemen.

But when an unprincipled gentleman compromises Charlotte's reputation, her romantic thoughts disappear at the possibility of losing her independence. As she struggles to extricate herself from her slander, her situation reveals both the nature of each gentleman and of true love.

With Charlotte Collins, Jennifer Becton mines the rich vein of literary characters who've vanished into the mists of history. Her newly widowed Charlotte is an expert in social nuance, but does she know her own heart as well? Charming, witty, and grounded in period detail, Becton's debut novel will make Jane Austen fans rejoice. --Beverle Graves Myers, author of Her Deadly Mischief

"Becton does a wonderful job of bringing us back into Austen’s world in more importantly into the headspace of Charlotte after her husband dies. Dear reader, I almost felt as though I was watching a movie. Rich descriptions, wonderful character development and writing with genuine feeling.... I would recommend this to any purist!" --Kelly Yanke Deltener, National Jane Austen Sequel Examiner