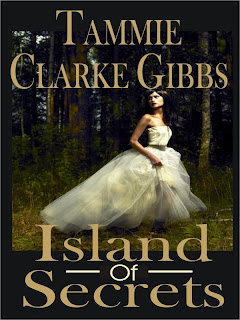 
Former Georgia Author of the Year Nominee, Tammie Clarke Gibbs has crafted a sweeping new time travel with the old-fashioned appeal of your favorite Gothic Novel. It will keep you guessing. This is one roller-coaster ride you won’t want to miss.

SHANE ALEXANDER has realized he should never have allowed his ex-girlfriend to spend her honeymoon on his island, but he never dreamed she’d run to the tabloids and blab about seeing ghosts. With the future of Leigh Island in danger, he devises a plan to dispel her claims and unknowingly sets in motion events that bring him face to face with a past that not only threatens his future but his life.

After breaking off her engagement, LILA FITZPATRICK wants a new beginning, but when she agrees to help her roommate by pretending to be a reporter, the last thing she expects to find is the man of her dreams. The question is what will he do when he finds out who she really is?

On An Island of Secrets
One woman, two men and a love that transcends time get a second chance to prevent history from repeating itself. But will love be enough to win the battle against time and stop the force that’s kept them apart for centuries?

"Take a modern day journalist, toss in some intrigue and stir it up with some paranormal time travel and what you get is Island of Secrets.

This is one of those books that will surprise you at every turn. A woman who is pretending to be someone else on a mysterious island where nothing is as it seems. Everyone has secrets, including the island. Will anyone survive when the secrets are revealed?

You should really read this book....I guarantee you will have an entertaining visit to the Island of Secrets."--Amazon Reviewer


"Rarely do I have the time to read for pleasure; however, I came across this title and decided to download it on my kindle app on my phone, thinking that I would read it when I could find the time. I found a few spare minutes over Christmas break and decided to start on this book. Much to my surprise, I could not put it down. I read the entire book, from cover to cover, in one day! This book was that good. In fact, this book was excellent. I love the imagery used in the description of the characters and scenes. I felt like I was actually watching the events unfold. I will definitely make the time to read it again. I hope there will be more from this author very soon."--Amazon Reviewer
Posted by Holly Hook at 8:00 PM