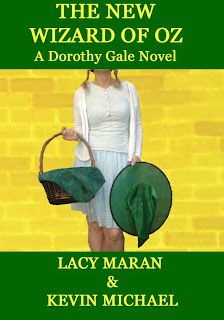 Dorothy Gale is fifteen years removed from Oz and the last of her friends to get married. But Dorothy's long time boyfriend Peter is dragging his feet proposing. After a visit with Peter's wacky divorced parents, Dorothy sees behind the curtain to a failed proposal in Peter's past, making her worry he'll never pop the question. Enter John Timmins, an old friend with a perfect family who's ready to propose now, yet doesn't get Dorothy's heart racing. At a yellow brick crossroad, Dorothy is visited by the Tin Man, Scarecrow, and Lion to help her decide: wait it out with the man she loves, or settle with a man she'll have to learn to love?

"The New Wizard Of Oz" is a humorous and romantic novel that combines L. Frank Baum and W.W. Denslow's classic characters with elements of "Bridget Jones" and "Meet The Parents."

"As someone who loves the original Oz books, I wondered how a new take like this would pan out. And much to my surprise, it exceeded my expectations. The novel manages to combine humor with classic "will he or won't he propose?" The Tin Man, Scarecrow, and the Cowardly Lion all make appearances as do Alice Lyddell (of Wonderland fame) and Huck Finn. I loved the twists and turns and new perspective on Dorothy."--Amazon Reviewer

"The New Wizard of Oz is a light, cute, romp. Where would Dorothy be after she grows up? How would Dorothy act if she was in the 21st century, instead of the 20th century? This book looks at that. It's a very light, fast read. It's well written & edited, with only a couple of things that were worded funny (and maybe that's just me, I'm not exactly an English teacher or a professional editor). The plot moves along at a good pace, and you are introduced to a set of characters that are each crazier than the next."--Amazon Reviewer
Posted by Holly Hook at 8:00 PM