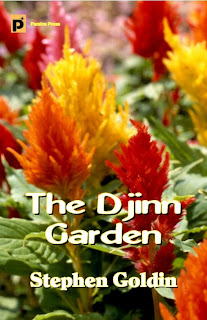 The Djinn Garden by Stephen Goldin

In a world of Arabian Nights adventure, a band of heroes is on a quest to reunite the Crystal of Oromasd and save the world. One of their number, the beautiful young djinn named Cari, vanishes on a mysterious island in the Central Sea and the others must avoid being enslaved themselves and defeat a powerful invisible demon if they hope to rescue her.

This is definitely worth a read. Sure, it's an excerpt from a much bigger series, but I found myself able to read through effortlessly--the sign of good writing. I liked that it isn't typical fantasy. How many books out there in the fantasy section have djinn in them? Not most.

So check it out and the rest of Stephen Goldin's works. He's definitely a writer who knows what he's doing. 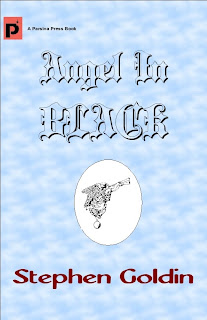 Angel In Black by Stephen Goldin

Where to Get It:
Amazon.com (for Kindle)
Barnes and Noble (Nook)
Smashwords (all eBook formats)
Sony (for Sony Reader)

Five supernatural tales from a master storyteller. This book contains the stories:

Visit the Shop, where the mysterious proprietor will take you on journeys into the second sphere--a land of nightmares, the mystical realm where legendary creatures battle for the souls of humans, and where every victory has its price. But do you dare NOT pay?
Posted by Holly Hook at 8:00 PM