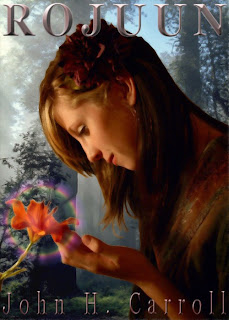 Ryallon is a vast world with enormous forests, great mountain ranges, and vast oceans. Large human populations live on a few of the continents, but many areas of the world are unexplored and filled with magical creatures of all sorts. It is in this magical world that our story occurs.

Tathan left home at the age of fifteen in order to travel the world and live a life of adventure. Fourteen years later, he has come home to the valley where he was raised. He found the adventure along the way, but it hadn’t always been the sort of adventure one dreamed of; with dragons, maidens, knights and treasure. Most of it was much darker; with dark alleys, knives, and a primal struggle for life at the lowest levels.

Liselle is a young woman of 17 years whose parents wish her to marry soon. However, marriage is the last thing on her mind when she has never seen anything beyond the lonely valley where she lives. Liselle spends much of her time talking to the flowers about how she feels and they listen to her intently.

Vevin is . . . well . . . something else entirely. His home was recently stolen from him by a terrible creature who hurt him badly. Now he is looking for a new home. Preferably something with a large area to keep his treasure . . . once he acquires some.

Sir Danth is the greatest of the Knights of Morhain . . . of course, he’s the only Knight of Morhain still alive . . . sort of alive . . . only different.

Rumors are spreading about a new race called “Rojuun”, who appeared from the depths of the mountains eight hundred years ago with the intention of taking over the world. It is their understanding that humans exist to serve them. They are a bit disappointed that the humans don’t seem to be aware of that fact.

The companions are charged with finding out more about this race of Rojuun. Will they be entranced by beautiful music flowing through the air, or will they die a horrible death in the darkest depths of the world? And who, or what exactly is Vevin anyway?

"Carroll's first novel is a tale filled with magic and adventure. It will draw you in and carry you forward as you join Tathan and his beautiful cousin Liselle as they leave the serenity of their home valley to explore the world. They join with a pair of quirky characters that they meet along the way, and the four find themselves fighting for their lives and the lives of the Rojuun in a land deep inside the earth. The journey forges the bonds of their friendship as they learn just what they and each other are made of.

A well-paced novel with diverse, believable characters and lands that come to life through skillful description, Rojuun doesn't disappoint."--Smashwords Reviewer
Posted by Holly Hook at 8:00 PM