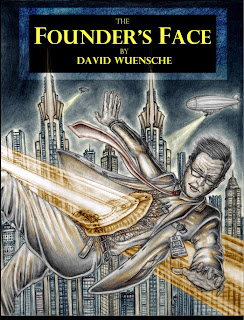 The Founder's Face by David Wuensche

From the perspective of an outsider, The Union is a virtual paradise. The sole blemish on its otherwise perfect surface is the secretive and seemingly unstoppable Process Cult. Detectives Sali Ross and Gordon Pratt live with the dead-end assignment of hunting down the vigilante religion's elite membership. Like their predecessors, though, they have little to show for their work. But when the source of the killings comes into question, the two officers find themselves at the center of an even older mystery. Is the cult really the villain that The Union makes them out to be? The very origin of the nation may unravel as the detectives slowly begin to consider the impossible.

"This book was a very fun read. It was a most enjoyable sci-fi. It had twists that I did not anicipate. David created a world that was detailed and interesting. I reccommed this book to sci-fi mystery lovers everywhere."--Amazon Reviewer
Posted by Holly Hook at 8:00 PM