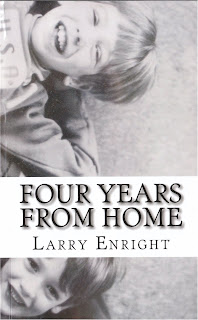 
Four Years from Home by Larry Enright is a work of fiction, set in 1972. It is the story of a man named Tom Ryan and his search for his younger brother, Harry, who has been gone for four years. It has elements of humor, but is not at all times funny. It is part mystery, but is not entirely about uncovering the unknown. It explores poignant issues of morality but in an odd, offbeat fashion. As Tom Ryan says: "Growing up, Harry was always the shining star of the family. He was the one you'd name if you were trying to think of kids who were holy, and the one I'd list as a brown-nosing little punk who deserved to get beat up on the playground for making it hard on the rest of us. He was the one God, and Grandma Ryan, had called to the priesthood."

"By turns funny, sad and poignant, Four Years from Home takes the reader on a journey - externally and internally - as its flawed narrator seeks to solve a mystery. The novel is well written, entertaining and thought provoking."--Amazon Reviewer

"I bought this only because it was cheap, but it turned out to be a case of getting much more than I paid for. Often mysteries will have no clues as to what is actually going on which I think is poor storytelling--Â«The Usual SuspectsÂ» is an exception--, but this one gave me several clues throughout. Most of Tom's narrative is amusing, but the dramatic parts are dramatic; I was grinning or crying through most of the book. Yes, I would recommend this to friends."--Amazon Reviewer
Posted by Holly Hook at 8:00 PM