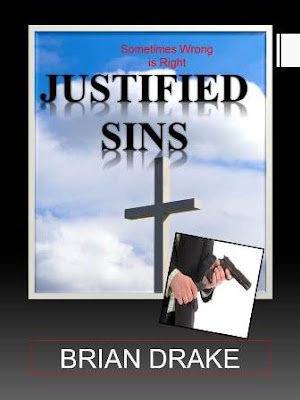 
A FAMILY SHATTERED BY VIOLENCE…

A WOMAN ON THE RUN…

When his foster sister sends out a call for help, Pierce cannot turn away. Her husband, a safe cracker gone straight, has been murdered after taking one last job to better provide for his pregnant wife, but now the killers are after her too.

Pierce dives in with blazing guns to take on a crime syndicate intent on tying up loose ends, and cracks open a world where his moral code will be put to the test, where evil is made to look good, and everyone has an excuse.

FACED WITH RIGHT OR WRONG, WHICH WOULD YOU CHOOSE?

"You are put right into the action guns and amazing characters. You will be hooked from the first paragraph. Since i purchased my Kindle I have fallen deep into the crime novels. With the likes of Ed McBain, and Raymond Chandler. So I thought i'd give Justified Sins a try and downloaded the sample and went instantly to hit the buy button. So glad to of heard of Brian Drake work and had the privilege to interview him about the book."--Amazon Reviewer

"Justified Sins brought me back. I love Raymond Chandler or a movie with Humphrey Bogart where the dialogue is clipped and telling, the characters are clear and interesting and the story is intriguing. You get it all in Justified Sins. The great thing, though, is that this is a thoroughly modern noir thriller. As a woman reader it's also nice to see a man who can really write women characters. I'd definitely recommend this book."--Amazon Reviewer
Posted by Holly Hook at 8:00 PM