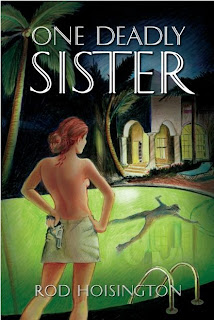 One Deadly Sister by Rod Hoisington


When an almost-too-clever young law student in Philadelphia gets a life-or-death call from her estranged brother who just moved to Florida--she tells him to go to hell. She doesn't need this. She's holding an old grudge and resents having her life in Philadelphia interrupted.

The brother doesn't come looking for trouble, he simply wants to get past his Philadelphia divorce and start a new life in Florida, but woman-trouble comes looking for him. Unfortunately, he arrives in the small Florida ocean side town just as someone murders the local gubernatorial candidate. The brother doesn't have a clue about women and gets seduced and framed.

He hasn't bothered with his estranged sister up north for years but now, as a stranger in a hostile town, she's his only hope.

She reluctantly decides to at least check out his predicament. This small step leads the sister into an ever-increasing entanglement of deceit, double-cross, and danger, as she can't leave well-enough alone and goes after the real killer in this fast-paced mystery.

ONE DEADLY SISTER is the first book in the Sandy Reid series. The sequel, THE PRICE OF CANDY has just been released.

"A very creative and enjoyable first novel...grabs hold of you early on and you can't get away from it...I will definitely be looking for another novel by Rod Hoisington!" --Betty Gelean for ReviewTheBook.com

"...(Stayed up) 'til the wee hours of the morn', coz I was busy reading a quite interesting novel entitled One Deadly Sister by Rod Hoisington." --DelGal's blog

"...I just opened the book and could not stop reading till I realized that I'd already spent 5 minutes of my working time getting engrossed in your book!" --Vikram Narayan, fReado.com
Posted by Holly Hook at 8:00 PM