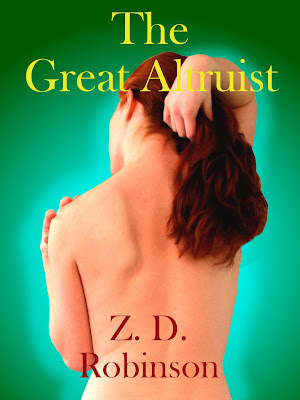 The Great Altruist by Z.D. Robinson


Genesis is a confident, tiny, and brash time-traveler, sure of her abilities, and ready to use them on behalf on anyone in need of fixing a past mistake. But when she tries to help a young Holocaust survivor, Jadzia, prevent World War II, she is forced to recognize that her incredible powers are not without a price.

Defeated and filled with regret over her failure, she struggles to learn from her mistake and swallow her pride. Then James Grant enters her life. Depressed over a lost love, James is taken from the present back in time on a journey to win back the girl of his dreams. With Genesis's help, he uncovers every terrible family secret in his past and decides to save his parent's marriage instead - all while learning that living in the past will lead to his own future ruin.

Genesis, now in love with James, tries to leave him behind and live a life of solitude to avoid breaking his heart again. But then she learns of her true origin and loses all of her powers...and just when humanity will need them the most: halfway around the world, an organization bent on destroying civilization and starting anew is gathering its final members for a mission into Earth's future to steal a weapon of mass destruction. When James is dragged into their scheme, he is forced to choose between saving Genesis, his new bride, and all of humanity. What follows is an adventure filled with ruthless secret societies, backstabbing parents, and a battle across time and space between Genesis reborn and the organization's most twisted agent.

"This was a good read, and kept me engaged and entertained throughout the book. When the stories change, they just change. There isn't really a transition between them, and it almost feels like a book of short stories because of it. The characters are well developed, and you care about the main ones. Even the "bad guys" seem well thought out and planned.

Considering this book deals with time travel, it's a sign of a well thought out book that there are not any major plot holes. You never read a fact that gets called into question later on in the book (at least that I can recall, I didn't specifically look for them).

All in all, this looks like a good start for a beginning author, and I look forward to see what else he brings to the table."--Amazon Reviewer
Posted by Holly Hook at 8:00 PM