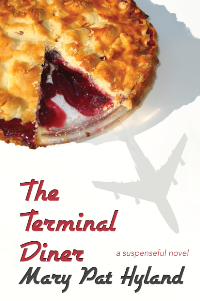 "Men like pie." Who would know the truth behind those words better than Elaina Brady's mother Maria? Months after she showed her teenage daughter how to bake perfect pie and hours after offering that culinary wisdom, Maria abandons Elaina, her sister Dee Dee and their father Walt. All it took was a lingering, lusty look from a Missoula trucker who stopped by their family's diner and ordered a slice of lemon meringue. Maria hitches a ride west with him, and with that impulsive decision, sixteen-year-old Elaina loses her mother and gains a job baking pies at the diner.

A decade after Maria's departure, Elaina is still working at The Terminal Diner, just around the bend from an upstate New York airport. Her humdrum life is defined by pie-baking routine. Elaina realizes painfully that all she still knows about the opposite sex is summed up in the three last words her mother spoke to her. Then one deceivingly beautiful morning in September 2001, horrifying acts committed by terrorists a hundred miles away upset her world, bringing new influences into her life and inspiring her to be like her mother-impulsive. Will Elaina survive the consequences of her actions?

"Mary Pat Hyland has done it again. From start to finish The Terminal Diner kept my interest while at the same time feeling a plethora of emotions. I found myself relating to the emotions of the main character. I didn't want to put it down until I finished reading it. Thank you for providing such an entertaining read. Making it available on Kindle is a big plus. Ms. Hyland is a gifted author and I'm looking forward to her next book."--Amazon Reviewer

"This book is absolutely brilliant! With a new set of characters placed in a setting of one of our nation's worst tragedies, it was interesting to see how she wove her story and built suspense. Her treatment of 9/11 was neither overstated nor maudlin as she told the story as seen by characters affected by the awful tragedy, but well removed from its origin. As usual, her characters were superb, each with his/her own lovable (or despicable!)intrigue. I did not see the ending, which was unbelievably clever, coming! Also as usual, I could not put her book down and truly missed the characters when I was done with the book (in less than 24 hours, I might add!). Hollywood agents would do well to snap up the rights to this masterpiece before it is gone!!!"--Amazon Reviewer
Posted by Holly Hook at 8:00 PM