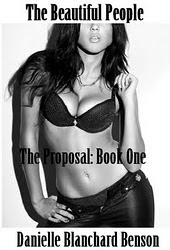 Type: All books in this series are novellas

Where to Get Them:

Remember the turn of the 21st century? Movie stars were larger than life, event films were the norm and it was the last breath of an era tinged with equal amounts of innocence and cynicism.

The Beautiful People is a unique look at young Hollywood during a particular time in the film industry when movie stars still carried their own particular magical brand of clout and films made mega-bucks.

From the gritty streets of Canoga Park and Reseda to the ritziest addresses in Beverly Hills, the Pacific Palisades and Bel Air, The Beautiful People takes you on a ride. The journey to fame and fortune in the entertainment industry is not for the faint of heart.

"The Proposal is a saucy, juicy read. It's Jackie Collins meets Entertainment Tonight with Entourage. The surprising part, however, is that Danielle Blanchard gets to the heart of a scene with the barest of words."--Smashwords Reviewer
Posted by Holly Hook at 8:00 PM