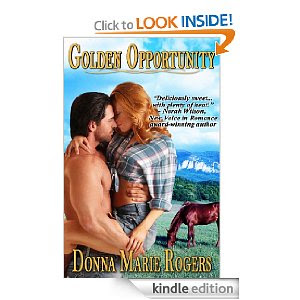 
James McMillan is a third generation owner of the most prosperous horse ranch in Golden, Colorado. When a gorgeous little filly shows up at his door waving what she claims is the deed to half his ranch, James tries to send her packing. But the document is authentic, according to his lawyer: Reese McMillan sold the little opportunist his half of the Double M during a poker game in Atlantic City. So not only must James find a way to buy those shares back, he needs to fight his growing attraction to his luscious new business partner—who turns out to be a lot more than just a pretty face.

Angela Roberts, having been on her own since she was a teenager, has never wanted anything more than the security of a real home. Her dreams come true when the chance to own half of a Colorado horse ranch falls into her lap. If Reese McMillan is too blind to appreciate what he has, that's his loss. Only she hadn't counted on the hostile reception she receives from his brother. Surly as a bear, James McMillan is also much too handsome for her peace of mind. Refusing to be intimidated, Angela sets out to win him over by proving she has what it takes to help him run the ranch—and ends up losing her heart to both.