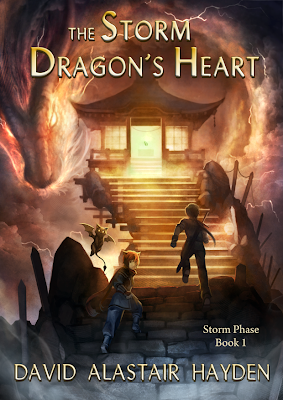 Turesobei dreamed of adventure, a way to prove he was no longer a child.
Wizards should be careful what they wish for.

Destined to become his clan's next high wizard, studious Turesobei has constantly struggled to live up to other people's demands and expectations, but now he's had enough.

When his treasure-hunting father arrives with important news to discuss with the current high wizard, Turesobei spies on their secret meeting and accidentally foils an assassination attempt. As a reward his father invites him on an expedition to find an artifact known as the Storm Dragon's Heart.

But when disaster strikes, their quest becomes a race for survival.

Aided by a sassy ninja cat-girl and a mysterious diary that transforms into a winged familiar, Turesobei must face deadly cultists, vengeful spirits, and a mad wizard from a rival clan who's determined to use the artifact to destroy Turesobei's homeland.

The Storm Dragon's Heart will delight readers with a thrilling tale of exotic lands, mystical creatures, forbidden love, and fast-paced adventure. (Ages 10 and up)
Posted by Holly Hook at 8:00 PM