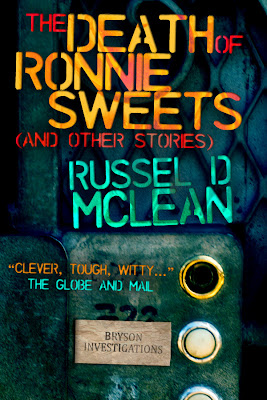 The Death of Ronnie Sweets


Before he introduced the world to Scottish Private Investigator J McNee, award-nominated crime writer Russel D McLean wrote a series of gritty short stories featuring PI Sam Bryson, a young investigator with a strong sense of justice that is tested to the limit as he walks the mean streets of Scotland's fourth largest city.

The Death of Ronnie Sweets collects all the original Sam Bryson stories in one volume, with an introduction by award-winning US author Sean Chercover and an afterword by the author.

Many of these stories first appeared in Alfred Hitchcock's Mystery Magazine while others were published by Thrilling Detective Mystery Magazine, Spinetingler Magazine and Needle Publishing.

"...the stories exhibit such a sharp and honest voice it’s hard to believe they were written by a man in his early 20s. They are dark stories – sometimes very dark – but that darkness is balanced by both a dry Scottish wit and a genuine sense of concern for the people involved" Sean Chercover (from his introduction)