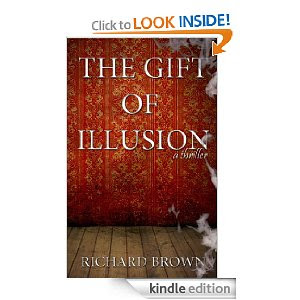 The Gift of Illusion by Richard Brown

ELMWOOD'S BEST DETECTIVE IS ABOUT TO MEET ITS WORST VILLAIN! An ancient evil has returned to continue the study it began over a century ago, and it's looking for volunteers. Isaac Winters is the perfect test subject. He's a detective with a damaged past, and something to prove. On the night of his wife's murder sixteen years ago, which left him a single father, Isaac thought he had seen the worst mankind had to offer. Until now. It moves like a virus from person to person, carefully selecting its next host, and leaving a trail of incinerated bodies in its wake. There are no witnesses and no evidence except for a small statue of some unknown figure. Accompanied by a partner short on experience, Isaac must uncover and defeat this faceless villain before it takes from him the greatest reminder of his dead wife. Their daughter.

"This little town gets a taste of evil in a big way! There is some truly evil and disturbing stuff in here." - Mickey @ I'm a book shark

"The last few chapters are very intense, and I found it impossible to put the book down. This is definitely not one of those predictable story lines. It left me wondering what the future holds for the characters, and I'm hoping for a sequel. I definitely recommend reading this one!" - Amazon Reviewer

"The Gift of Illusion is a paranormal thriller. I was instantly drawn to Isaac, Amy and Daniel. Isaac carries the world on his shoulders and my heart grieved for him. The Illusionist is horrifying and the author really adds just the right details to bring authenticity to the horrors he gifts. The pace is steady, keeping me turning the pages until the heart-pumping end. If you enjoy a touch of the paranormal or a great thrilling suspense, pick up The Gift of Illusion. I can't wait to see what the author writes next!" - Wendy @ Minding Spot
Posted by Holly Hook at 8:00 PM