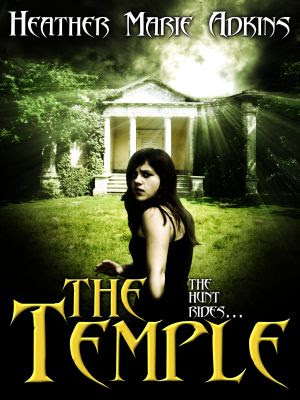 The Temple by Heather Marie Adkins

Vale Avari has a mysterious past and a laundry list of super-powers, but that's nothing compared to what she finds upon moving from small town U.S.A to jolly-good England.

A chance dart throw lands her in Quicksilver, an off-the-map place with a big problem - people are dying, and word is, it's supernatural.

At her new place of employment, a temple dedicated to the ancient Mother Goddess, Vale learns something even more shocking - women guards are disappearing at an alarmingly patterned rate; women who possess special gifts like her own.

Supernatural powers aside, Vale isn't ready to believe in the Wild Hunt as the culprit, and she's determined to prove the deaths are acts of human violence.

Plagued by a brute with a history of domestic violence and lusting after a dark-eyed man with a secret, Vale has a limited amount of time to discover the killer before he strikes again. In the process, she'll learn things aren't always what they seem and the supernatural might not be so extraordinary after all.

The Hunt could ride for her.

"an engrossing murder mystery with paranormal elements, romance, vivid descriptions and lots of humor that made it even more interesting...I had trouble putting down this story.”--Amazon Reviewer

“Very surprised by the twists I didn't see coming. Great book, and I look
forward to reading more from this author.”--Amazon Reviewer
Posted by Holly Hook at 8:00 PM