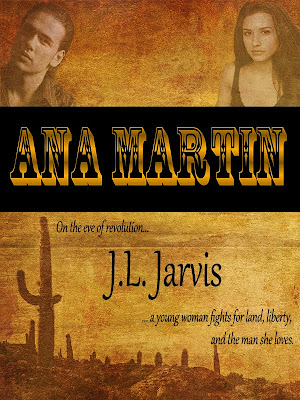 
Ana Martin's story begins on the eve of the Mexican Revolution. A stranger appears on Ana Martin's Galveston doorstep, summoned by her father before his untimely death. Eduardo Guerra Peña remains by her side to settle an indebted estate that has left Ana penniless. When Ana boards a train bound for her uncle's vast hacienda, Eduardo is there to see her safely to her new home in the stark desert landscape of northern Mexico.

Eduardo's passionate ideals set him at odds with the corrupt Mexican government as his writings fuel a revolution and draw Ana closer. But it is Carlos Barragan, the dashing rodeo trick rider and freedom fighter who touches her soul, setting Ana Martin on a journey that will test her strength and forge her destiny. Thrust into the dawn of the Mexican Revolution, Ana Martin will fight for land, liberty, and the people she loves.

"I read Watermarks by this author, and liked it so much I read Ana Martin. J.L. Jarvis writes emotional stories with compelling plots. This not only held my interest, I lost sleep over it! Ana Martin is not your typical romance novel setting. Its love and war theme makes for an intense and affecting romance story. I can't compare Ana Martin to any romance books, but if you liked Zorro, or Like Water for Chocolate, you might find this similar in setting and tone, but with an historical romance novel treatment."--Amazon Reviewer
Posted by Holly Hook at 8:00 PM