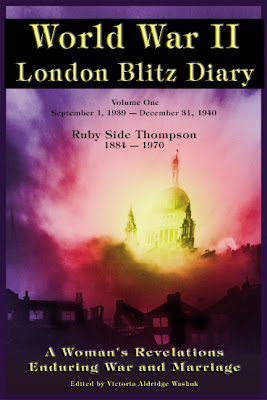 "As war rages on all around you, it can be hard to cope with the pressures of warfare. "World War II: London Blitz Diary" is a diary of Ruby Side Thompson as she tells her story of living under the pressure that the Luftwaffe put on London during the countless bombings throughout the war, pushing England to the brink of destruction. A personal story of a mother trying to keep her life together along with simple survival, "World War II" is a choice pick, not to be overlooked."--Midwest Book Review

"I first became familiar with this book by reading the serial posts of the diary posted on a blog. As a genealogist, I was totally engrossed by the first-hand experiences described in the diary. Not only could you read about the war and it's impact on the diarist, but the war theme was intertwined with the personal relationships that were part of the diarist's life. I found myself sympathizing with the main character who was truly a woman before her time. She struggled with her "role" and was trapped in what seemed to be an unfulfilling marriage. Her's was the kind of story that as a descendant I would love to read because of its raw honesty. I would recommend this to anyone interested in how the war impacted every day citizens who despite the chaos continued to deal with the mundane tasks of every day living and loving."--Amazon Reviewer
Posted by Holly Hook at 8:00 PM