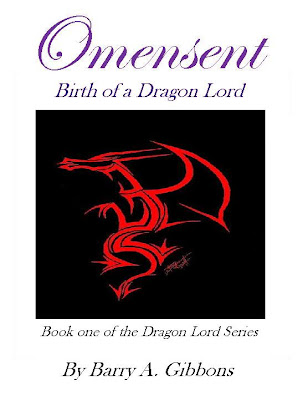 Omensent: Birth of a Dragon Lord by Barry A. Gibbons II

In a wild untamed world, the entire race of dragons are enslaved by a sadistic sorcerer and trapped inside of a gemstone. Four centuries later, a boy is born with the blood of dragons flowing in his veins.Cursed by his bizarre appearance, yet blessed with amazing abilities,he sets off on a quest to investigate the rumors of a rampaging dragon, and to avenge his father's murder.

"Refreshing Fantasy Novel Barry Gibbons creates a refreshing perspective on the typical fantasy story. He brings new light to a genre that has seen its days of darkness. He creates characters that are imperfect by nature, which grow and shine as they battle and conquer personal fears and flaws. An enjoyable read with an inherent knowledge base of arcane lore."--Didacts & Narpets

"This was a great book. It was funny, and easy to follow. I would recommend it to anyone who like fantasy/sci fi."
Posted by Holly Hook at 8:00 PM