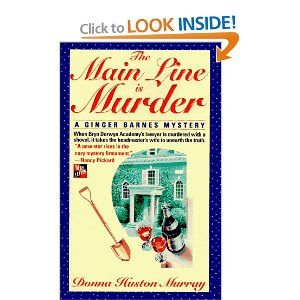 The Main Line Is Murder by Donna Huston Murray

When her husband becomes head of a school on Philadelphia’s tony Main Line, Ginger Barnes learns that small private schools need volunteers like the national debt needs taxes. She also learns that murder on the campus can kill the school’s reputation in a heartbeat. Gin’s Mop Squad job allows her to investigate without arousing suspicion, but can she expose the murderer in time to save the school–and her family’s new home–without exposing herself? If she succeeds, will her good deed go unpunished? The first of the Ginger Barnes Main Line mysteries.

I read a lot of domestic mystery's, have a lot of favorites, and [Donna Huston Murray’s] are at the top of the list." Ellen Ellis

“Finally, a cozy with a brain.” Ellie Miller, Independent Reviewer Fierce competitor Iffy Bigelow gets herself strangled at the world-famous Philadelphia International Flower Show; and if she ever wants to hear the end of it, amateur-detective Ginger Barnes must unearth whoever killed her mother's dear old friend. Second in the Ginger Barnes Main Line mystery series

“Not content with merely writing excellent, cozy mystery novels . . . Donna Murray seems to put extra thought and craftsmanship into the very last paragraphs of those chapters. . .So pick a less than usually busy week to start your reading. . . ." Lauren Bergold for Rivergate Books

“[Donna Huston Murray’s] voice is as familiar as a long-time girlfriend's yet provocative and wise as a favorite aunt's.” Earlene Fowler, Agatha winner and author of MARINER'S COMPASS and SEVEN SISTERS

"My only concern with these cozy type of mysteries is that often there just isn't enough there to be worthwhile, and they just aren't clever enough for me...not the case with your series....Very smart writing and a good enough plot to have kept me reading it pretty much in one sitting." Carolyn, "Alice" of Malice The Mystery Bookstore 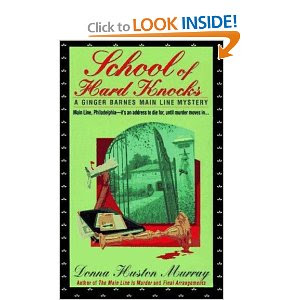 Quiet Beech Tree Lane has suddenly become a lightning rod for crime. First, Ginger Barnes’s friend is murdered by a home intruder. Thefts and threats and smashed mailboxes follow; but it’s the mugging of elderly eccentric Letty MacNair that compels Gin to dust off her deerstalker. If an impoverished old woman qualifies as a target, who could be next? Third in the Ginger Barnes Main Line mystery series.

“Barnes' irreverent attitude about her situation makes for a great character - almost as if Spenser was a housewife." The Drood Review of Mystery

"Murray writes a compelling tale-I read it in one sitting-with the family's problems as interesting as those of the neighborhood. . . . a smooth style, quiet humor, and a feeling for the texture of everyday life. Very highly recommended." Janet Overmyer, The Armchair Detective