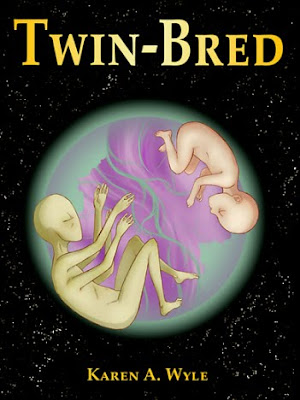 Twin-Bred by Karen A. Wyle

Can interspecies diplomacy begin in the womb?

Humans have lived on Tofarn, planet of creeks and rivers, for seventy years, but they still don't understand the Tofa. The Tofa are an enigma, from their featureless faces to the four arms that sometimes seem to be five. They take arbitrary umbrage at the simplest human activities, while annoying their human neighbors in seemingly pointless ways. The next infuriating, inexplicable incident may explode into war.

Scientist Mara Cadell's radical proposal: that host mothers carry fraternal twins, human and Tofa, in the hope that the bond between twins can bridge the gap between species. Mara knows about the bond between twins: her own twin, Levi, died in utero, but she has secretly kept him alive in her mind as companion and collaborator.

Perhaps Mara should have expected the enigmatic Tofa to have their own reasons to support her project. Perhaps the ever-cynical Levi should have warned her that members of the human government might use her twins as weapons against the Tofa. Will the Twin-Bred bring peace, war, or something else entirely?

Science fiction with a sociological and psychological focus, TWIN-BRED follows in the footsteps of Ursula K. LeGuin's The Left Hand of Darkness and Mary Doria Russell's The Sparrow.

“Now and then I read a really good book, and this is one of the best….I would love a sequel to this beautifully written, captivating novel.” - Ellen Ghyll, author

“Twin-Bred is one of the best science fiction novels I’ve read in decades. It is literary fiction as well as S-F…one of the most original stories I’ve ever read….beautifully written and riveting.” - R. Lee Holz, author

"[C]ompelling writing, complex and interesting characters, a plot heavy on intrigue and drama (heavy, that is, without being melodramatic) and a unique setting . . . catch my interest and my admiration. . . . Wyle’s story has it all . . . a truly unique trip into a novel, intriguing, and reader-friendly world that is populated by a mixture of good guys, bad guys, and aliens – and believe me, you will shake your head more than once along the way as you try to decide which characters fall within which categories . . . She also sets the ending up nicely for a sequel . . . . Don’t miss this one." Blog "All Things Jill-Elizabeth"
Posted by Holly Hook at 8:00 PM