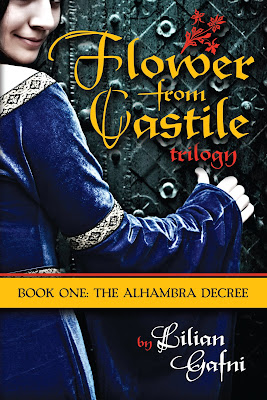 Flower from Castile Trilogy Book One: The Alhambra Decree by Lilian Gafni


The Flower from Castile Trilogy opens in 1491 during the tumultuous unification of Spain under Catholicism. The battle for the conquest of Granada, which was held by the Islamic Moors for 700 years, empties Spain's coffers and decimates the ranks of her soldiers. Beautiful young Isabella Obrigon lives a life of privilege in Seville until she is caught between these two powerful nations. She is forced to uncover a secret about her birth and becomes trapped between two faiths and two peoples. She must decide whether to follow her heart and join her endangered brethren seeking exile from the brutal and infamous Inquisition, or stay and live a lie. When Isabella is held prisoner in the fabled Alhambra palace in Granada, an encounter with Miguel Costa seals her fate. Nearby, Christopher Columbus-who may have secrets of his own-waits impatiently for the war to be won. His dreams of exploration and fabulous wealth can only come true if he receives a summons from Queen Isabella.


What they’re saying about it:

“Are you looking for an adventure read? If you answered YES, then this is the book for you. Flower from Castile Book One: The Alhambra Decree”~The Phantom Paragrapher

“A riveting tale of Medieval Spain, Flower from Castile Book One: The Alhambra Decree is an excellent choice for fans of historical fiction.”~The Midwest Book Review

“Gafni’s understanding of the time period seems paramount, and her plot is solid. Isabella’s movement between different cultures allows readers to explore what it was like to be a Catholic, Jew or Moor during one of history’s darkest periods. A gripping plot for Flower from Castile Book One: The Alhambra Decree.”~Kirkus Reviews
Posted by Holly Hook at 8:00 PM