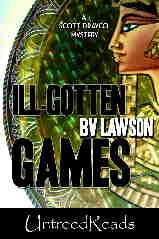 WHERE TO GET IT:

The clock is ticking as crime consultant Scott Drayco and "the world's most diminutive defense attorney" Benny Baskin play games with a dangerous killer in order to save an innocent man from going to jail.

Why is the killer texting cryptic poems to Drayco on his cellphone about stolen Egyptian figurines, and what do the messages mean? Was the murder a crime of opportunity or was it planned all along for more sinister reasons?

Drayco races around Washington, D.C,. trying to find the answers and avoid becoming a puppet, as the killer pulls the strings.

Scott Drayco, an investigator, must find evidence to help his boss, Lawyer Baskin in a case he does not want to lose. Drayco plays a game of cat and mouse with a murderer and comes out the winner. This was a well written, fast read, that held my attention.
Posted by Holly Hook at 8:00 PM