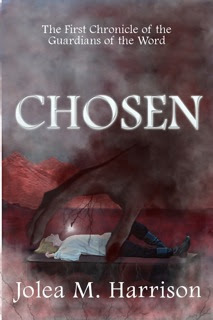 Chosen is a fantasy adventure - location; Hell, Purgatory, the Demon’s Lair, and Hell is everything it’s cracked up to be for sixteen-year-old Dynan Telaerin who finds himself on a corpse-strewn hillside, charged with saving the soul of his ancestor, desperate to avoid the monsters and minions who want to eat his soul.

The running starts, and doesn't stop to the end of this action packed adventure of a young man coming to terms with his life while he's barely a spirit, through horrors he thought existed only in dreams.

Chosen is the first book of the series, The Guardians of the Word.

"Harrison is a fantastic writer. The world she has woven in "Chosen" is magical, dramatic, and sucks the reader right in."

"Chosen is a truly enjoyable read with an endearing hero..For fans of sci-fi fantasy, a must-read."

"The bad guys made me squirm and the description of their destruction of Purgatory with all the dead bodies was wonderfully awful!" 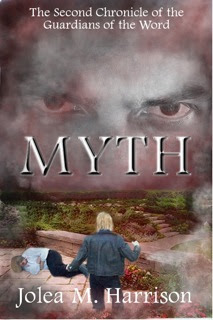 
Where truth and lies mingle among friends and enemies alike.

Behind the veil that separates the living from the dead, awaits the teeming horde. Evil bides its time, probing for weakness. It slithers across the divide, searching for the weak, the insane, the criminal mind, and even the average citizen of Cobalt, commanding them. The order is to kill. The target...

Seventeen-year-old Dynan Telaerin's biggest challenge is keeping the woman he loves and the brother he adores from being in the same room at the same time. Liselle Tremault and Dain Telaerin despise one another, forcing Dynan to choose between them, but a murder plot against him abruptly trumps other concerns. Visions of the destruction of civilization follow, turning shadowy dreams into the possibility of terrible reality. The lines blur between what is evil and what is good as one seeks to destroy him and the other seeks to delay his future. The methods each side employs to attain their goals are remarkably similar, leaving Dynan in a desperate race for his life.

MYTH, the second book of the Guardians of the Word fantasy series considers the complications of truth and intention, where one may not be conducive to the other and where some evil is necessary to negate others.

"From page one, I was sucked back into the Dain and Dynan's world."

"There is love, death,hate,greed, conspiracies and political intrigue..." 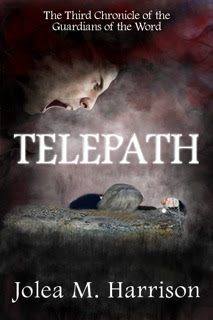 A ruthless killer hunts them. He’ll stop at nothing to see his vision fulfilled and his hunger satiated. He has the ability to seek them out through the power of his mind, on the barest strand of thought. If he finds them, he will consume their souls.

Dynan and Dain Telaerin are forced into exile, unable to stay in one place for long. They set out on a journey of survival, barely staying a step ahead of their enemies while they must build an attack force large enough to defeat the massive Cobalt military and retake the throne of their father. They must find a way to increase their telepathic abilities to defeat the greatest evil the Kingdoms have ever known that follows an evil design and seeks to destroy the world.

But nothing is at it seems, and a single mistake could mean death where both must live.

Telepath is the third book in the Guardians of the Word series. The fourth book, Legend, is set to be released in April, 2012.

"Just like CHOSEN and MYTH this book is extremely well written, the characters are rich and engaging, the worlds are spectacular..."

"The author has again written a fantastic book that will hook you and not let you go even after you've finished reading it."
Posted by Holly Hook at 8:00 PM