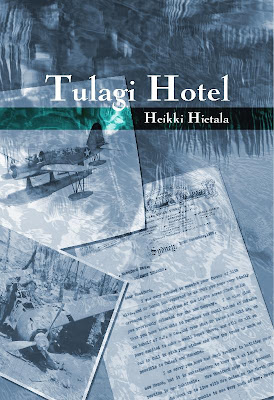 World War II has given Jack McGuire the chance to escape the confines of the Midwest and the family farm. An ace U.S. Navy fighter pilot, he risks his life each day with his squadron in the South Pacific theatre. For him, there's calm and camaraderie up there in the cockpit. But when the war ends, Jack struggles to find his place in civilian society

Turning his back on his home, family and inheritance, he returns to the Solomon Islands. Here he builds a hotel on the same island paradise he flew over in his years of combat.

But when Kay Wheeler, the widow of his wartime best friend and wingman, comes to visit the island, Jack's orderly world is disrupted. He is forced to consider whether there's room enough for two in his reinvented life.

"" Heikki Heitala has written such a fine novel that spans World War Two in
the South Pacific to the decade after the war when one of the fighter
pilots, Jack McGuire, buys a surplus float plane and returns to the Solomon
Islands to find a life for himself. [...]

There is no Hollywood glamour and action-for-action's sake in this fine
novel. These are real people with real lives and real feelings who live in a
real world filled with the pains of growing up as a shy kid on a Nebraska
farm, is a nice guy, becomes an ace fighter pilot, tries to find love and
fails at it, lives what most of us would think of as an idyllic life on an
island in the South Pacific, and like so many men in his position, finds his
closest friend and confidant in a bottle of alcohol. Utterly human and
likable in spite of themselves, this is a story that, once read, is not
forgotten.

Heikki Hietala is a fine writer. I look forward to seeing a next book from
him. This is an unqualified 5 star read."
Posted by Holly Hook at 8:00 PM