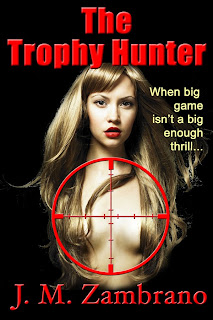 The Trophy Hunter by J.M. Zambrano


When attorney Diana Martin takes on a case referred by her best friend, PI Jess Edwards, the case unexpectedly dredges up memories of childhood abuse that fuel Diana's resolve to protect the children involved.

As the case unfolds, Diana and Jess, a flamboyant African-American beauty, cross paths with a group of hunters that includes the new client, his estranged son-in-law and three other buddies who have more in common than hunting: their women are disappearing.

A psychopath hides in plain sight within the band of hunters. For him, the thrill of big game has lost its savor. Now he collects ethnically diverse women who please his esthetic senses. And he's learned how to keep them beautiful forever.

As Diana struggles with her self-image after a failed marriage and the stillbirth of her first child, she's tempted by the advances of her client's son-in-law whose wife is one of the missing women. Ever practical and outspoken, Jess warns her of potential trouble. But neither woman is aware that more than a broken heart is at stake for Diana. In fact, both Diana and Jess have recently made the psychopath's acquisitions list.

"The Trophy Hunter is a better written novel than many of the thrillers on the market today. It keeps moving forward at a great pace, compelling the reader to hold on and ride along. Tension increases ever more quickly as the two heroines approach the final dramatic conclusion. What a great ride! Try it."--Amazon Reviewer

"Great read will keep you awake till you finish the book. Fast paced action with good plot twists. I read the entire book in one sitting. Better written then a James Patterson novel!! Highly recommend it."--Amazon Reviewer
Posted by Holly Hook at 8:00 PM